In November 2015, Slovenia erected a technical security barrier in the form of a razor-wired fence along the most exposed parts (178 km) of the Slovenia-Croatia border. Over a 10-month period (11 November 2015–11 September 2016), carcasses of 21 ungulates (13 red deer and 8 roe deer) and two grey herons were found entangled in the razor-wired fence, giving a mortality rate of 0.12 ungulates/km of fence. Although the direct impact of the fence on wildlife mortality is of relatively low importance, over the long-term, the fence may pose a serious threat to wildlife via its barrier effect, resulting in fragmentation of habitats and disconnection of populations. Therefore, systematic studies are urgently required to determine the implications of the fence on spatial behaviour, movements and gene flow of key species in the border zone. 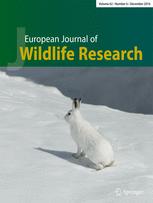