The Astyanax scabripinnis species complex with its wide geographical distribution is an excellent model for evolutionary studies. Populations are usually geographically isolated but also, in some cases, occur in sympatry. In this study, five allopatric and/or sympatric populations of A. scabripinnis were analysed using geometric morphometry, cytogenetic markers, assays for induced breeding and phylogenetic inferences to draw conclusions on species limits and speciation processes in a natural setting. The morphometry of individuals indicated that the populations were well differentiated from each other. Cytogenetic evidence revealed a more conserved karyotypic macrostructure; however, molecular cytogenetic results obtained by in situ hybridization indicated 5S and 18S rDNA gene probe locations specific to each population. The reproduction tests for three locations suggest isolation between populations and the phylogenetic analyses suggest that the fish evaluated cluster in a monophyletic group. The combined data indicate that individuals are adapted to different environments in a complex evolutionary scenario, with linkage of populations during a recent geological period. However, due to reproductive isolation, the populations are evolving independently, reinforcing the existence of distinct cryptic species. 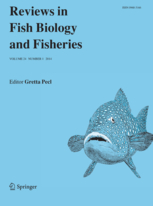