Sodium magnetic resonance imaging (23Na-MRI) of the brain has shown changes in 23Na signal as a hallmark of various neurological diseases such as stroke, Alzheimer’s disease, Multiple Sclerosis and Huntington’s disease. To improve scan times and image quality, we have implemented the 3D-Cones (CN) sequence for in vivo 23Na brain MRI.

Using signal-to-noise (SNR) as a measurement of sequence performance, CN is compared against more established 3D-radial k-space sampling schemes featuring cylindrical stack-of-stars (SOS) and 3D-spokes kooshball (KB) trajectories, on five healthy volunteers in a clinical setting. Resolution was evaluated by simulating the point-spread-functions (PSFs) and experimental measures on a phantom.

All sequences were shown to have a similar SNR arbitrary units (AU) of 6–6.5 in brain white matter, 7–9 in gray matter and 17–18 AU in cerebrospinal fluid. SNR between white and gray matter were significantly different for KB and CN (p = 0.046 and <0.001 respectively), but not for SOS (p = 0.1). Group mean standard deviations were significantly smaller for CN (p = 0.016). Theoretical full-width at half-maximum linewidth of the PSF for CN is broadened by only 0.1, compared to 0.3 and 0.8 pixels for SOS and KB respectively. Actual image resolution is estimated as 8, 9 and 6.3 mm for SOS, KB and CN respectively.

The CN sequence provides stronger tissue contrast than both SOS and KB, with more reproducible SNR measurements compared to KB. For CN, a higher true resolution in the same amount of time with no significant trade-off in SNR is achieved. CN is therefore more suitable for 23Na-MRI in the brain. 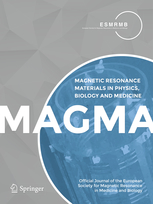