Purpose of an article is diagnosis of status of religious values in media. Mass media, internet, press, television, radio often are based on primary truths of religious belief in transfer of matter, persuasively use matter of religious motives, symbols and meanings. Devaluation of sphere of deep sacred senses brings about changes in hierarchy of universal values too. Religion is entangled in mechanisms of trade, market and economy. Religious attitude easily becomes attitude of consumption. It creates danger of destruction not only religious aspect of human being, but idea of Person as physical, psychical and spiritual entirety which is fundamental for personalistic conception of human. In article author shows on that spheres of profanation as fashion, advert and film. In that context important is seeking universal hierarchy of values which may to preserve religious sphere against expansion of process of consumption. 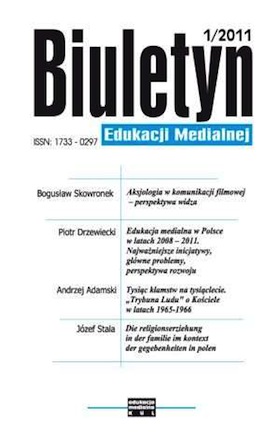