The article discusses the issue of the oldest tourist guides and similar editions concerning Torun and connected with the publishing market of Torun. The analysis was limited chronologically by the years 1846-1903, where the bottom border was the time of publishing the first book containing some features of a guidebook, and the top border reflects the year of publishing the first guidebook answering all the requirements of this genre in its form and content. The formal and substantive analysis was connected with the comparison of Torun's publications with the model tourist guide, which resulted in showing the evolution of Torun's Baedeker guides. The author proved that the prints of Julius Wernicke, Wegweiser durch Thorn und seine Umgebungen. […] of 1846 and Theodor Körner, Der Führer durch Thorn enthaltend eine historisch-politische Uebersicht [...] of 1847 - hitherto considered Torun's first tourist guides - did not meet all the requirements to be classified as guides. The work of Reinhard Uebrick, Thorn. Illustrierter Fűhrer [...] of 1903 may be called the first monographic guide of Torun. It must be said that less comprehensive information for travelers was included before - in the second half of the 19th century - in guides concerning bigger geographic areas, published by printing houses of John Murray, Theobald Grieben, Joseph Meyers and Karl Baedeker. They also contributed to the formation of this genre in relation to Torun. 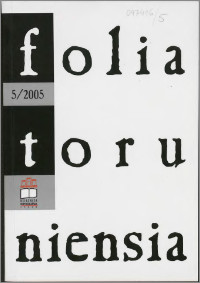