Proteomic insights into the role of the large-effect QTL qDTY 12.1 for rice yield under drought

Smallholder rice cultivation productivity is directly related to alleviating hunger and poverty. Biotic and abiotic stresses increasingly subvert the process, and drought is the most common stress. A mechanistic understanding of plant response to drought could lead to the use of gene-based markers to generate drought-tolerant rice. Such an understanding is challenging due to the complex interplay of genes, proteins, and metabolites. However, comparison between a wild type and its near-isogenic line (NIL) for a validated QTL can reduce noise in the omics studies and highlight critical networks and mechanisms. We compared the quantitative proteome of the flag leaves, spikelets, and roots between an upland rice genotype Vandana and its NIL 481-B. The latter contained the same genetic background as Vandana except for the QTL qDTY 12.1 for rice yield under drought. Differentially expressed proteins (DEPs) under drought were identified using isobaric labeling approach and MapMan-based analysis. DEPs were involved in photosynthesis, respiration, energy generation, and carbon–nitrogen acquisition/remobilization, largely through the pathways of sugars/starch and amino acid metabolism. DEPs could be related to drought-specific morpho-physiological responses of 481-B, reiterating the value of our results. Importantly, comparative proteome analysis of the three tissues highlighted tissue-specific differences of the same or similar proteins and underscored proteins, pathways, and mechanisms putatively involved in reproductive stage drought tolerance. More dependable and/or large-effect candidate genes/proteins might be obtained from similar multi-tissue proteomic analyses comparing wild-type plants and their NILs. 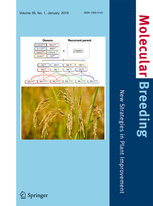