The esophageal submucosal glands (SMG) protect the squamous epithelium from insults such as gastroesophageal reflux disease by secreting mucins and bicarbonate. We have observed metaplastic changes within the SMG acini that we have termed oncocytic glandular metaplasia (OGM), and necrotizing sialometaplasia-like change (NSMLC). The aim of this study is to evaluate the associated clinicopathological parameters of, and to phenotypically characterize the SMG metaplasias. Esophagectomy specimens were retrospectively assessed on hematoxylin and eosin sections and assigned to either a Barrett’s esophagus (BE) or non-BE control group. Clinicopathologic data was collected, and univariate analysis and multivariate logistic regression models were performed to assess the adjusted associations with NSMLC and OGM. Selected cases of SMG metaplasia were characterized. SMG were present in 82 esophagi that met inclusion criteria. On univariate analysis, NSMLC was associated with BE (p = 0.002). There was no relationship between NSMLC and patient age, sex, tumor size, or treatment history. OGM was associated with BE (p = 0.031). No relationship was found between OGM and patient age, sex, or tumor size. On multivariate analysis, BE was independently associated with NSMLC (odds ratio [OR] 4.95, p = 0.003). Treatment history was also independently associated with OGM (p = 0.029), but not NSMLC. Both NSMLC and OGM were non-mucinous ductal type epithelia retaining a p63-smooth muscle actin co-positive myoepithelial cell layer. NSMLC and OGM were present in endoscopic mucosal resection specimens. Our study suggests that SMG metaplasia is primarily a reflux-induced pathology. NSMLC may pose diagnostic dilemmas in resection specimens or when only partially represented in mucosal biopsies or endoscopic resection specimens. 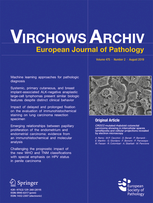