The importance of metabolomic data in functional genomic investigations is increasingly becoming evident, as is its utility in novel biomarker discovery. We demonstrate a simple approach to the screening of metabolic information that we believe will be valuable in generating metabolomic data. Laser desorption ionisation mass spectrometry on porous silicon was effective in detecting 22 of 30 metabolites in a mixture in the negative-ion mode and 19 of 30 metabolites in the positive-ion mode, without the employment of any prior analyte separation steps. Overall, 26 of the 30 metabolites could be covered between the positive and negative-ion modes. Although the response for the metabolites at a given concentration differed, it was possible to generate direct quantitative information for a given analyte in the mixture. This technique was subsequently used to generate metabolic footprints from cell-free supernatants and, when combined with chemometric analysis, enabled us to discriminate haploid yeast single-gene deletants (mutants). In particular, the metabolic footprint of a deletion mutant in a gene encoding a transcriptional activator (Gln3p) showed increased levels of peaks, including one corresponding to glutamate, compared to the other mutants and the wild-type strain tested, enabling its discrimination based on metabolic information. 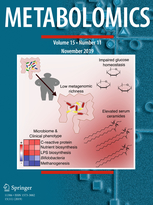