Marijuana use and risk of lung cancer: a 40-year cohort study

Cannabis (marijuana) smoke and tobacco smoke contain many of the same potent carcinogens, but a critical—yet unresolved—medical and public-health issue is whether cannabis smoking might facilitate the development of lung cancer. The current study aimed to assess the risk of lung cancer among young marijuana users.

A population-based cohort study examined men (n = 49,321) aged 18–20 years old assessed for cannabis use and other relevant variables during military conscription in Sweden in 1969–1970. Participants were tracked until 2009 for incident lung cancer outcomes in nationwide linked medical registries. Cox regression modeling assessed relationships between cannabis smoking, measured at conscription, and the hazard of subsequently receiving a lung cancer diagnosis.

At the baseline conscription assessment, 10.5 % (n = 5,156) reported lifetime use of marijuana and 1.7 % (n = 831) indicated lifetime use of more than 50 times, designated as “heavy” use. Cox regression analyses (n = 44,284) found that such “heavy” cannabis smoking was significantly associated with more than a twofold risk (hazard ratio 2.12, 95 % CI 1.08–4.14) of developing lung cancer over the 40-year follow-up period, even after statistical adjustment for baseline tobacco use, alcohol use, respiratory conditions, and socioeconomic status.

Our primary finding provides initial longitudinal evidence that cannabis use might elevate the risk of lung cancer. In light of the widespread use of marijuana, especially among adolescents and young adults, our study provides important data for informing the risk–benefit calculus of marijuana smoking in medical, public-health, and drug-policy settings. 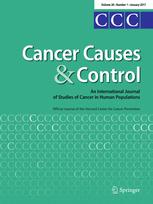