Imaging techniques can provide information about the tumor non-invasively and have been shown to provide information about the underlying genetic makeup. Correlating image-based phenotypes (radiomics) with genomic analyses is an emerging area of research commonly referred to as “radiogenomics” or “imaging-genomics”. The purpose of this study was to assess the potential for using an automated, quantitative radiomics platform on magnetic resonance (MR) breast imaging for inferring underlying activity of clinically relevant gene pathways derived from RNA sequencing of invasive breast cancers prior to therapy.

All radiomic size features were positively associated with multiple replication and proliferation pathways and were negatively associated with the apoptosis pathway. Gene pathways related to immune system regulation and extracellular signaling had the highest number of significant radiomic feature associations, with an average of 18.9 and 16 features per pathway, respectively. Tumors with upregulation of immune signaling pathways such as T-cell receptor signaling and chemokine signaling as well as extracellular signaling pathways such as cell adhesion molecule and cytokine-cytokine interactions were smaller, more spherical, and had a more heterogeneous texture upon contrast enhancement. Tumors with higher expression levels of JAK/STAT and VEGF pathways had more intratumor heterogeneity in image enhancement texture. Other pathways with robust associations to image-based features include metabolic and catabolic pathways.

We provide further evidence that MR imaging of breast tumors can infer underlying gene expression by using RNA sequencing. Size and shape features were appropriately correlated with proliferative and apoptotic pathways. Given the high number of radiomic feature associations with immune pathways, our results raise the possibility of using MR imaging to distinguish tumors that are more immunologically active, although further studies are necessary to confirm this observation. 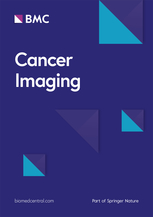