Two-dimensional Particle Tracking Velocimetry (PTV) is a promising technique to study the behaviour of granular flows. The aim is to experimentally determine the free surface width and position of the shear band from the velocity profile to validate simulations in a split-bottom shear cell geometry. The position and velocities of scattered tracer particles are tracked as they move with the bulk flow by analyzing images. We then use a new technique to extract the continuum velocity field, applying coarse-graining with the postprocessing toolbox MercuryCG on the discrete experimental PTV data. For intermediate filling heights, the dependence of the shear (or angular) velocity on the radial coordinate at the free surface is well fitted by an error function. From the error function, we get the width and the centre position of the shear band. We investigate the dependence of these shear band properties on filling height and rotation frequencies of the shear cell for dry glass beads for rough and smooth wall surfaces. For rough surfaces, the data agrees with the existing experimental results and theoretical scaling predictions. For smooth surfaces, particle-wall slippage is significant and the data deviates from the predictions. We further study the effect of cohesion on the shear band properties by using small amount of silicon oil and glycerol as interstitial liquids with the glass beads. While silicon oil does not lead to big changes, glycerol changes the shear band properties considerably. The shear band gets wider and is situated further inward with increasing liquid saturation, due to the correspondingly increasing trend of particles to stick together. 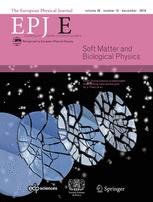