The record of bluemouth rockfish Helicolenus dactylopterus (Delaroche, 1809) at low depth suggests that the species is prone to large vertical migrations. This capture confirms the occurrence of the species in the Tunisian waters where it is known as very rare. It confirms also the success of ecological restoration of Tunis Southern Lagoon and the possible establishment of fish populations, mainly due to a favourable biological environment, mostly constituted by crustacean species among them, species belonging to the genus Sphaeroma Latreille, 1802 play an important role. 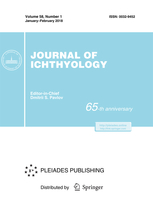