A new practical approach to estimate the body angular velocity of maneuvering spacecraft using only vector measurements is presented. Several algorithms have been introduced in previous studies to estimate the angular velocity directly from vector measurements at two time instants. However, these direct methods are based on the constant angular velocity assumption, and estimation results may be invalid for attitude maneuvers. In this paper, an estimation scheme to consider attitude disturbances and control torques is proposed. The effects of angular velocity variation on estimation results are quantitatively evaluated, and an algorithm to minimize estimation errors is designed by selecting the optimal time interval between vector measurements. Without losing the simplicity of direct methods, the design parameters of the algorithm are restricted to the expected covariance of disturbances and the maximum angular acceleration. By applying the proposed estimation scheme, gyroscopes can be directly replaced by attitude sensors such as star trackers. 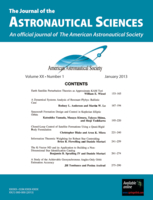