Diabetes mellitus and its risk factors among a middle-aged population of Iran, a population-based study

Diabetes is a major health problem around the world. The risk of diabetes is increasing worldwide, and its misdiagnosis may have significant public health implications. This study aimed to determine the prevalence of diabetes and its risk factors among the middle-aged population in Shahroud, north of Iran. In the present study, the plasma glucose levels in 5190 subjects aged 40–64 years, participating in the first phase of the Shahroud Eye Cohort Study in 2009, were measured. Non-fasting glucose level greater than or equal to 200 mg/dl and/or the use of blood glucose-lowering drugs were considered as criteria for the diagnosis of diabetes. To determine the risk factors associated with diabetes, simple and multivariate logistic regressions were used. The prevalence of diabetes in men, women, and the total population were 10.4, 13.6, and 12.3 %, respectively. The mean blood glucose levels in men and women were 116.7 and 117.3 mg/dl, respectively. Age (odds ratio (OR) = 1.04), hypertension (OR = 2.5), being overweight (OR = 1.5), and obesity (OR = 1.5) were positively associated with diabetes. In addition, having an insurance (OR = 0.48) and male gender (OR = 0.81) was associated with a reduced risk of diabetes. Based on the results of the present study, the prevalence of diabetes in the studied population is high, and according to the epidemiological transition of diseases, a high percentage of the Iranian population are at risk for cardiovascular diseases. Considering the risk factors identified in the present study, developing effective interventions is essential. 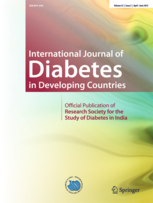