Lisofylline (LSF), is the R-(−) enantiomer of the metabolite M1 of pentoxifylline, and is currently under development for the treatment of type 1 diabetes. The aim of the study was to develop a physiologically based pharmacokinetic (PBPK) model of LSF in mice and to perform simulations in order to predict LSF concentrations in human serum and tissues following intravenous and oral administration. The concentrations of LSF in serum, brain, liver, kidneys, lungs, muscle, and gut were determined at different time points over 60 min by a chiral HPLC method with UV detection following a single intravenous dose of LSF to male CD-1 mice. A PBPK model was developed to describe serum pharmacokinetics and tissue distribution of LSF using ADAPT II software. All pharmacokinetic profiles were fitted simultaneously to obtain model parameters. The developed model characterized well LSF disposition in mice. The estimated intrinsic hepatic clearance was 5.427 ml/min and hepatic clearance calculated using the well-stirred model was 1.22 ml/min. The renal clearance of LSF was equal to zero. On scaling the model to humans, a good agreement was found between the predicted by the model and presented in literature serum LSF concentration–time profiles following an intravenous dose of 3 mg/kg. The predicted LSF concentrations in human tissues following oral administration were considerably lower despite the twofold higher dose used and may not be sufficient to exert a pharmacological effect. In conclusion, the mouse is a good model to study LSF pharmacokinetics following intravenous administration. The developed PBPK model may be useful to design future preclinical and clinical studies of this compound. 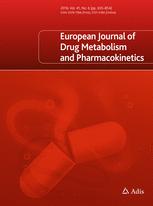