Xylene is volatile organic compound that has been reported to increase the incidence of cancer and various diseases related to the immune system, cardiovascular systems, respiratory and reproductive organs. However, there are currently few biomarkers in human cases. Using microarray, we analysed 10 participants for the xylene-exposure group and 10 controls that were not exposed to xylene. The two groups were compared in terms of expression levels and methylation patterns. We identified 6 genes that were down-regulated and hyper-methylated, and 132 that were up-regulated and hypo-methylated in the xylene- exposure group compared to control. We sorted out and 28 biomarker candidates were chosen using DAVID. And then, we used IPA to select the significant potential biomarkers in them. We used network analysis and selected 6 significant genes, and these 6 genes showed altered expression and methylation in xylene-exposure group, suggesting that they are suitable potential biomarkers for xylene exposure.

The Korean Society of Toxicogenomics and Toxicoproteomics 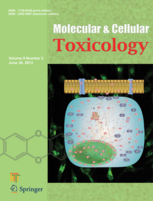