The Wajid Sandstone around Abha/Khamis Mushayt and in its type area: lithostratigraphic architecture and correlations

The Wajid Sandstone of southeastern Saudi Arabia is a prolific aquifer and a recent target for hydrocarbon exploration, but a sedimentologic model and the stratigraphic architecture of the sediments have only recently been presented for the type area of the Wajid Group around Wadi Dawasir. Farther to the west, the Wajid Sandstone was also recognized, but stratigraphic architecture and sedimentology are poorly known. This paper presents the preliminary results of investigations targeted at the outcrops west and south of the type area, covering the area between Wadi Dawasir, Najran in the south, and Abha in the west. Two successions are recognized, a lower red one and an upper beige one. Although the lower one sedimentologically shares several features with the lowermost unit in the type area, the marine Dibsiyah Formation, a correlation remains doubtful. The red succession lacks the Skolithos fauna of the Dibsiyah Formation, and its facies associations point to a fluvial depositional environment. From its stratigraphic position and from its lithology, the red succession is similar to the Siq Formation of the northern Kingdom and it will be discussed whether the red succession might be a yet unrecognized equivalent of the Siq Formation. The lower red unit is bounded by a major unconformity, separating it from the underlying basement. This pan-African unconformity developed during a latest Neoproterozoic–Cambrian episode of intensive weathering and peneplanation. It is characterized by a thick weathering zone and an overlying coarse but thin quartz pebble breccia to conglomerate, which together represent a regolith. The beige succession is definitely correlated to the Khusayyayn Formation. Both successions are characterized by macro-scale to giant 2D and 3D submarine dunes and share many other phenomena. The basal unconformity also shows regolith development with a quartz pebble conglomerate, whose clasts seem to have been reworked from the pan-African regolith. 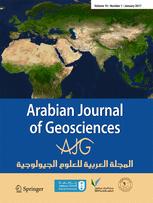