In this research, a torsional cyclic shear test was modeled using the 3D discrete element method (DEM). The results are compared against experimental data and micro-mechanical aspects of the soil during the loading are discussed. The aim of the work is to study the homogeneity of strains during this laboratory test and to compare the micro-mechanical behavior of the soil sample for different strain levels. The experimental investigation was performed using a synthetic soil material made of glass beads, which simplifies the modeling and calibration since normal interaction forces do not induce rotation of the particles. Both the model and experimental tests used the same grading distribution and particle size. We showed that the hysteresis cycles can be properly reproduced in terms of shape and magnitude. Thus, we obtained a robust estimation for the secant shear modulus and damping ratio at different strain levels. With this, it was possible to build stiffness degradation and damping increase curve to compare it with experimental data obtained from torsional shear tests. Based on this validation of the DEM model, we discuss the micro-mechanical behavior of the soil and its relation with the macroscopic parameters obtained. It is shown that shear strain distribution on the sample is not uniform and that large values of strains concentrate close to the top of the sample as top rotation increases, which differs from the standard assumption of a constant value across the height of the sample. Additionally, it is observed that at 0.8 times radius, the cumulative torque reaches approximately 90% of the total torque applied to sample. 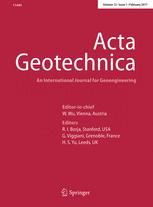