In the present study, the nutritional value of Tetraselmis suecica and Tisochrysis lutea (previously known as Isochrysis aff galbana T-ISO strain) freeze-dried biomass for feeding Sparus aurata fry was evaluated. A total of 25,500 fry (3.7 mg body weight) were fed for 55 days on diets containing 5 and 10 % (w/w) Tetraselmis or Tisochrysis, as well as on a microalgae-free diet. Fish fed 5 % Tetraselmis showed higher growth performance, nutrient utilization, and survival values than fish fed Tisochrysis. The use of microalgae significantly decreased the body lipid content in fry fed the highest microalgae level. Fry fed Tisochrysis-supplemented diets increased the DHA content in muscle, and consequently the EPA/DHA ratio decreased significantly, whatever dietary level considered. In general, digestive protease activities were not adversely affected by dietary microalgae inclusion, although slight variations were observed during fish development. Microalgae utilization causes a positive effect on intestinal mucosa ultrastructure owing to an increase of total enterocyte absorption surface that was observed in fish fed microalgae-supplemented diets. Cluster analysis of data separated clearly fish fed Tisochrysis-supplemented diets from the rest of experimental groups. This study confirms that Tetraselmis freeze-dried biomass can be used as dietary ingredient in started feeds for S. aurata fry, although an inclusion level of 5 % is recommended. 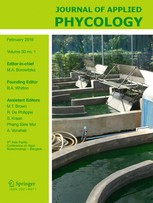