Maximizing maize quality, productivity and profitability through a combined use of compost and nitrogen fertilizer in a semi-arid environment in Pakistan

In Pakistan, low crop yields are a common problem of sandy-loam arid and semi-arid agroecosystems. Poor nitrogen use efficiency (NUE) and widespread soil nitrogen (N) deficiency resulting from higher N losses are the main reasons for low yields. Compost may offer a nutrient source in this context as it is relatively stable, has a high NUE and crop N uptake, and may contribute to lower N losses in this region. This research conducted during 2011 and 2012, focused on application of N from poultry manure compost (PMC) and pressmud compost (PrMC) with urea in different ratios (0:0, 100:0, 75:25, 50:50, 25:75, 0:100) for sustainable maize production under the semi-arid conditions of Faisalabad. Overall, combined use of PMC and PrMC with urea in the 2 years increased the grain yield relative to the application of PMC and PrMC on their own. The greatest plant N uptake during the two years from PMC and urea at 25:75 was equivalent to mineral N management (0:100), and it resulted in maximum total grain yield (218.6%) and grain protein (19.8%). This resulted in the lowest N loss from the soil, and the largest NUE (19.1 kg kg−1). Economically, this treatment also provided the greatest net income (932 US$ ha−1), and a benefit cost ratio (2.1). Based on these results, PMC and urea at 25:75 was considered highly beneficial in increasing maize yield while reducing the loss of less-stable N from the soil, increasing NUE and N uptake in inherently poor soils. However, further evaluation is needed to decide whether this N nutrition strategy can be adopted on a wider scale. 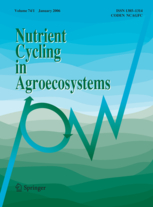