Gaseous emissions from seven self-heating coal waste dumps in two large coal mining basins, Upper and Lower Silesia (Poland), were investigated by gas chromatography (GC-FID/TCD), and the results were correlated with on-site thermal activity, stage of self-heating as assessed by thermal mapping, efflorescences, and surface and subsurface temperatures. Though typical gases at sites without thermal activity are dominated by atmospheric nitrogen and oxygen, methane and carbon dioxide are present in concentrations that many times exceed atmospheric values. On average, their concentrations are 42.7–7160 ppm, respectively. These are levels considered harmful to health and show that coal waste fire can be dangerous for some years after extinction. At thermally active sites, concentrations of CH4 and CO2 are much higher and reach 5640–51,976 ppm (aver.), respectively. A good substrate–product correlation between CO2 and CH4 concentrations indicates rapid in-dump CH4 oxidation with only insignificant amounts of CO formed. Other gas components include hydrogen, and C3–C6 saturated and unsaturated hydrocarbons. Decreasing oxygen content in the gases is temperature-dependent, and O2 removal rapidly increased at > 70 °C. Emission differences between both basins are minor and most probably reflect the higher maturity of coal waste organic matter in the Lower Silesia dumps causing its higher resistance to temperature, or/and a higher degree of overburning there. 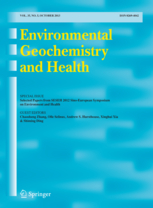