Canada is both a capitalist and colonial society, one founded on the seizing of Indigenous lands for capitalist purposes. In the process, a variety of “crimes of the powerful” were committed, including the theft of Indigenous lands, the forcible confinement of Indigenous people onto reserves, and the subjection of Indigenous children to physical and sexual assaults via the residential school system. In more recent times, the corporate quest for extractive resources has created further harms for Indigenous communities. The lives of too many Indigenous people in Canada are now contoured by complex poverty, Indigenous children are over-represented in the child welfare system, and Indigenous adults are over-incarcerated in prisons and jails. Using a “crime” lens, this paper brings an awareness of Canada as a capitalist and colonial society—conceptualized here as “corporate colonialism”—to the foreground. In the process, the various manifestations of the “crimes of the powerful” against the Indigenous peoples of Canada are exposed. 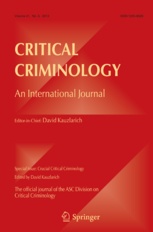