To describe the spectrum of movement disorders and cerebrospinal fluid (CSF) neurotransmitter profiles in paediatric patients with POLG disease.

We identified children with genetically confirmed POLG disease, in whom CSF neurotransmitter analysis had been undertaken. Clinical data were collected retrospectively. CSF neurotransmitter levels were compared to both standardised age-related reference ranges and to non-POLG patients presenting with status epilepticus.

Forty-one patients with POLG disease were identified. Almost 50% of the patients had documented evidence of a movement disorder, including non-epileptic myoclonus, choreoathetosis and ataxia. CSF neurotransmitter analysis was undertaken in 15 cases and abnormalities were seen in the majority (87%) of cases tested. In many patients, distinctive patterns were evident, including raised neopterin, homovanillic acid and 5-hydroxyindoleacetic acid levels.

Children with POLG mutations can manifest with a wide spectrum of abnormal movements, which are often prominent features of the clinical syndrome. Underlying pathophysiology is probably multifactorial, and aberrant monoamine metabolism is likely to play a role. 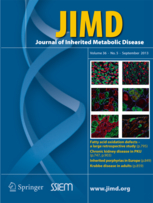