The effect of micro-bubbles on the turbulent boundary layer in the channel flow with Reynolds numbers (Re) ranging from $$0.87\times 10 ^{5}$$ 0.87×105 to $$1.23\times 10^{5}$$ 1.23×105 is experimentally studied by using particle image velocimetry (PIV) measurements. The micro-bubbles are produced by water electrolysis. The velocity profiles, Reynolds stress and instantaneous structures of the boundary layer, with and without micro-bubbles, are measured and analyzed. The presence of micro-bubbles changes the streamwise mean velocity of the fluid and increases the wall shear stress. The results show that micro-bubbles have two effects, buoyancy and extrusion, which dominate the flow behavior of the mixed fluid in the turbulent boundary layer. The buoyancy effect leads to upward motion that drives the fluid motion in the same direction and, therefore, enhances the turbulence intense of the boundary layer. While for the extrusion effect, the presence of accumulated micro-bubbles pushes the flow structures in the turbulent boundary layer away from the near-wall region. The interaction between these two effects causes the vorticity structures and turbulence activity to be in the region far away from the wall. The buoyancy effect is dominant when the Re is relatively small, while the extrusion effect plays a more important role when Re rises.

The Chinese Society of Theoretical and Applied Mechanics; Institute of Mechanics, Chinese Academy of Sciences 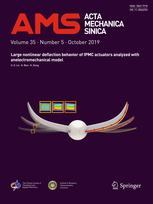