Bioavailability and mobility of lead (Pb) in soils depend upon their partitioning between solution-solid phases and their further fractionation and redistribution among different solid-phase components. However, the dynamics of Pb in salt-affected (saline–sodic) Pb-contaminated (polluted) paddy soil need more exploration particularly under the influence of application of amendments at varying hydrological regimes and residence time. In this context, an incubation study was conducted to investigate the effect of application of three inorganic amendments (gypsum, rock phosphate and diammonium phosphate) on Pb fractions at two soil moisture regimes (flooding regime and 75% field capacity) and two incubation times (after 2 and 30 days) successively in non-saline/sodic and saline–sodic Pb-polluted paddy soils. After applied treatments, the concentration of Pb in five, i.e., exchangeable (F1), carbonate (F2), Fe–Mn oxide (F3), organic matter and sulfide bound (F4) and residual (F5) fractions, was assessed by sequential extraction. The results showed that the Pb spiked in the soils was significantly (P ≤ 0.05) transformed from easily extractable (exchangeable and carbonate) fractions into less labile (Fe–Mn oxide, OM–S bound and residual) fractions. Among tested amendments, gypsum performed better in reducing the lability of Pb followed by DAP. 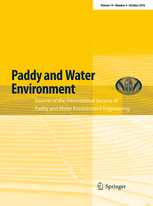