The purpose of this investigation was to determine the clinical and corneal microbial profile of infectious keratitis in a high human immunodeficiency virus (HIV) prevalence setting in rural South Africa. Data in this cross-sectional study were collected from patients presenting with symptoms of infectious keratitis (n = 46) at the ophthalmology outpatient department of three hospitals in rural South Africa. Corneal swabs were tested for herpes simplex virus type 1 (HSV-1) and 2 (HSV-2), varicella zoster virus (VZV) and adenovirus DNA by real-time polymerase chain reaction (PCR) and for bacteria and fungi by culture. Based on clinical history, disease characteristics and laboratory results, 29 (63 %) patients were diagnosed as viral keratitis, including 14 (48 %) viral keratitis cases complicated by bacterial superinfection, and 17 (37 %) as bacterial keratitis. VZV and HSV-1 DNA was detected in 11 (24 %) and 5 (11 %) corneal swabs, respectively. Among clinically defined viral keratitis cases, a negative viral swab was predominantly (93 %) observed in cases with subepithelial inflammation and was significantly associated with an increased duration of symptoms (p = 0.003). The majority of bacteria cultured were Gram-positive (24/35), including Staphylococcus epidermidis and S. aureus. Viral aetiology was significantly associated with a history of herpes zoster ophthalmicus (p < 0.001) and a trend was observed between viral aetiology and HIV infection (p = 0.06). Twenty-one (47 %) keratitis cases were complicated by anterior uveitis, of which 18 (86 %) were HIV-infected cases with viral keratitis. The data implicate a high prevalence of herpetic keratitis, in part complicated by bacterial superinfection and/or uveitis, in HIV-infected individuals presenting with infectious keratitis in rural South Africa. 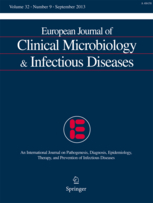