DNA contents of Chinese 134 bamboo species were first time announced, and FISH of 45S rDNA shows that paleotropical woody bamboo species may be originated from a multi-source system. 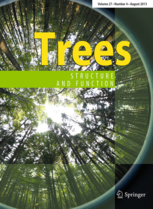