Soil moisture and nitrogen (N) are two important factors influencing N2O emissions and the growth of microorganisms. Here, we carried out a microcosm experiment to evaluate effects of soil moisture level and N fertilizer type on N2O emissions and abundances and composition of associated microbial communities in the two typical arable soils. The abundances and community composition of functional microbes involved in nitrification and denitrification were determined via quantitative PCR (qPCR) and terminal restriction length fragment polymorphism (T-RFLP), respectively. Results showed that N2O production was higher at 90% water-filled pore (WFPS) than at 50% WFPS. The N2O emissions in the two soils amended with ammonium were higher than those amended with nitrate, especially at relatively high moisture level. In both soils, increased soil moisture stimulated the growth of ammonia-oxidizing bacteria (AOB) and nitrite reducer (nirK). Ammonium fertilizer treatment increased the population size of AOB and nirK genes in the alluvial soil, while reduced the abundances of ammonia-oxidizing archaea (AOA) and denitrifiers (nirK and nosZ) in the red soil. Nitrate addition had a negative effect on AOA abundance in the red soil. Total N2O emissions were positively correlated to AOB abundance, but not to other functional genes in the two soils. Changed soil moisture significantly affected AOA rather than AOB community composition in both soils. The way and extent of N fertilizers impacted on nitrifier and denitrifier community composition varied with N form and soil type. These results indicate that N2O emissions and the succession of nitrifying and denitrifying communities are selectively affected by soil moisture and N fertilizer form in the two contrasting types of soil. 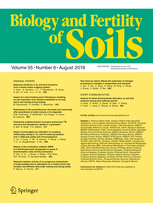