Robotic Liver Resection For Primary Hepatolithiasis: Is It Beneficial?

Primary hepatolithiasis is a disease characterized by primary biliary ductal abnormality with stone formation predominantly within the intrahepatic bile ducts. Its management is difficult, but liver resection has emerged as a promising treatment option.

Robotic liver resection (RLR) has been adopted in our center for the management of patients with hepatolithiasis. The operative and short-term outcomes of this cohort of patients were compared with a historical cohort of patients using open approach (OLR). A subgroup analysis was performed for left lateral sectionectomy.

Between September 2010 and April 2015, 15 RLRs were performed on patients with primary hepatolithiasis. The historical cohort consisted of 42 OLRs with operation done between January 2005 and January 2014. No differences were found in patient demographics, disease characteristics, or types of resection. No operative deaths occurred, and no difference was seen in complication rates. RLR had significantly less blood loss (100 vs. 235 ml; p = 0.011) and shorter hospital stays (6 vs. 8 days; p = 0.003). After a median follow-up of 19.4 months for RLRs and 79.2 months for OLRs (p < 0.001), there were no differences in residual stone rate, recurrent stone rate, or rate of recurrent cholangitis. Subgroup analysis of lateral sectionectomy (10 RLRs vs. 27 OLRs) revealed similar outcomes, i.e., less blood loss and shorter hospital stays in RLR.

Robotic liver resection reduces blood loss and shortens hospital stays compared with OLR. A longer follow-up is needed to assess the long-term outcomes of RLR regarding prevention of recurrent stones and cholangitis. 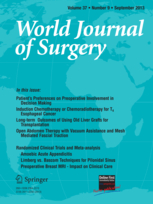