A novel arsenic (As)-resistant, arsenate-respiring, alkane-metabolizing bacterium KAs 5-22T, isolated from As-rich groundwater of West Bengal was characterized by physiological and genomic properties. Cells of strain KAs 5-22T were Gram-stain-negative, rod-shaped, motile, and facultative anaerobic. Growth occurred at optimum of pH 6.0–7.0, temperature 30 °C. 16S rRNA gene affiliated the strain KAs 5-22T to the genus Rhizobium showing maximum similarity (98.4 %) with the type strain of Rhizobium naphthalenivorans TSY03bT followed by (98.0 % similarity) Rhizobium selenitireducens B1T. The genomic G + C content was 59.4 mol%, and DNA–DNA relatedness with its closest phylogenetic neighbors was 50.2 %. Chemotaxonomy indicated UQ-10 as the major quinone; phosphatidylethanolamine, phosphatidylglycerol, and diphosphatidylglycerol as major polar lipids; C16:0, C17:0, 2-OH C10:0, 3-OH C16:0, and unresolved C18:1 ɷ7C/ɷ9C as predominant fatty acids. The cells were found to reduce O2, As5+, NO3−, SO42− and Fe3+ as alternate electron acceptors. The strain’s ability to metabolize dodecane or other alkanes as sole carbon source using As5+ as terminal electron acceptor was supported by the presence of genes encoding benzyl succinate synthase (bssA like) and molybdopterin-binding site (mopB) of As5+ respiratory reductase (arrA). Differential phenotypic, chemotaxonomic, genotypic as well as physiological properties revealed that the strain KAs 5-22T is separated from its nearest recognized Rhizobium species. On the basis of the data presented, strain KAs 5-22T is considered to represent a novel species of the genus Rhizobium, for which the name Rhizobium arsenicireducens sp. nov. is proposed as type strain (=LMG 28795T=MTCC 12115T). 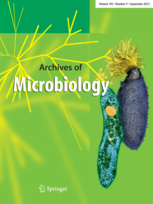