Eyespot (also called Strawbreaker) is a common and serious fungal disease of winter wheat caused by the necrotrophic fungi Oculimacula yallundae and Oculimacula acuformis (former name Pseudocercosporella herpotrichoides). A genome-wide association study (GWAS) for eyespot was performed with 732 microsatellite markers (SSR) and 7761 mapped SNP markers derived from the 90 K iSELECT wheat array using a panel of 168 European winter wheat varieties as well as three spring wheat varieties and phenotypic evaluation of eyespot in field tests in three environments. Best linear unbiased estimations (BLUEs) were calculated across all trials and ranged from 1.20 (most resistant) to 5.73 (most susceptible) with an average value of 4.24 and a heritability of H2 = 0.91. A total of 108 SSR and 235 SNP marker–trait associations (MTAs) were identified by considering associations with a −log10 (P value) ≥3.0. Significant MTAs for eyespot-score BLUEs were found on chromosomes 1D, 2A, 2D, 3D, 5A, 5D, 6A, 7A and 7D for the SSR markers and chromosomes 1B, 2A, 2B, 2D, 3B and 7D for the SNP markers. For 18 varieties (10.5%), a highly resistant phenotype was detected that was linked to the presence of the resistance gene Pch1 on chromosome 7D. The identification of genotypes with recombination events in the introgressed genomic segment from Triticum ventricosum harboring the Pch1 resistance gene on chromosome 7DL allowed the fine-mapping of this gene using additional SNP markers and a potential candidate gene Traes_7DL_973A33763 coding for a CC-NBS-LRR class protein was identified. 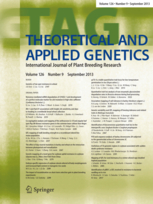