Extrusion film casting (EFC) is a commercially important process that is used to produce several thousand tons of polymer films and coatings. In a recent work, we demonstrated the influence of polymer chain architecture on the extent of necking in an isothermal film casting operation (Pol et al., J Rheol 57:559–583, 2013). In the present research, we have explored experimentally and theoretically the effects of long-chain branching on the extent of necking during nonisothermal film casting conditions. Polyethylenes of linear and long-chain branched architectures were used for experimental studies. The EFC process was analyzed using the 1-D flow model of Silagy et al. (Polym Eng Sci 36:2614–2625, 1996) in which the energy equation was introduced to model nonisothermal effects, and two multimode constitutive equations, namely the “extended pom-pom” (XPP, for long-chain branched polymer melts) equation and the “Rolie-Poly stretch version” (RP-S, for linear polymer melts) equation, were incorporated to account for the effects of polymer chain architecture. We show that the model does a better job of capturing the qualitative features of the experimental data, thereby elucidating the role of chain architecture and nonisothermal conditions on the extent of necking. 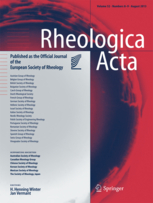