The electrochemistry of gold: II the electrocatalytic behaviour of the metal in aqueous media

Chemistry Department, University College Cork, Ireland Although it is the noblest and most inert of metals, and is a very weak chemisorber, gold displays a very wide range of electrocatalytic activity — especially in base. Such unexpected behaviour is rationalized here in terms of the unusual properties of nanocluster, microparticles or quantum dots. Such species, present as defects at the metal surface, undergo oxidation at unusually low potentials (significantly lower than that of bulk gold) in a process known as premonolayer oxidation. The resulting low coverage (or incipient) oxide species are assumed to be the mediators for oxidation reactions while unoxidized active gold atoms, present at lower potentials, often act as the mediators for reduction. Electrocatalysis on noble metals is quite often confined to the double layer region and only low coverage metal atoms at active sites are involved. The enhanced activity of gold in base is readily rationalized in terms of a super-Nernstian E/pH effect. The unusual properties of metal nanoclusters may also be used to rationalize the surprisingly high level of catalytic activity of oxide-supported gold microparticles as reported recently by Haruta and co-workers. 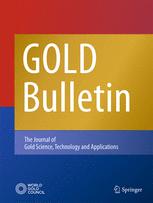