Living on the Edge? Dimensions of disadvantage in young people — An explorative study

Economic, social and cultural capital are counted amongst the central determinants of the transfer between young people’s training and their entering an occupation. However, these factors demonstrate a relatively high interpersonal variance, which necessitates a more detailed analysis, in particular in respect of disadvantaged young adults. This contribution investigates in line with the capital theory of Pierre Bourdieu whether there are differences in the resource capital within groups of disadvantaged youth and whether these affect participation in support programs. Based on data which were generated during the scientific support of a pilot program called “Voluntary social training year” by the German Institute for Youth Studies (DJI), it was possible to check the theoretical assumptions of varying resource capital against the empirical effects. 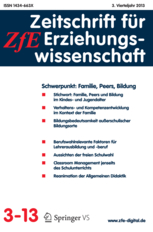