Hearing status after an industrial explosion: experience of the AZF explosion, 21 September 2001, France

Following the explosion of a chemical plant in France, a study was conducted to analyse the relationship between hearing thresholds and distance from the explosion based on post- and pre-blast audiometric data, and to describe the functional symptoms and visits for hearing problems.

Audiometric tests with standard procedure of 511 workers of a company located near the explosion were proposed and conducted by the occupational medicine department after the explosion. Past occupational noise exposure, past medical history of ear problems, distance from the explosion, functional symptoms and visits for hearing problems following explosion and results of past audiometric tests if available were collected. Workers were classified as “exposed” or “less exposed” according to the distance from the explosion. Mean decibel threshold shifts for each ear were analysed by frequency with Student’s t test and by multiple linear regression taking into account confounding factors.

The study demonstrated statistically significant hearing shift from 2,000 to 6,000 Hz in relation with distance from the explosion and showed that even when functional symptoms were present, people did not necessarily seek medical advice. Screening for hearing loss should be recommended for people most exposed to excess acoustic pressure, in order to offer them prevention advice. 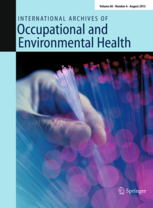