Allocating chemical defenses to regions or tissues most at risk for predatory attack may provide protection while simultaneously minimizing associated metabolic costs. Chemical defense allocation patterns were investigated in the aspiculate sponges Ircinia felix, I. campana, and Aplysina fulva collected between July 2005 and April 2006 from J Reef off the coast of Georgia, U.S.A. It was predicted that chemical defenses would be (1) higher in the outermost 2 mm layer of the sponge; (2) positively correlated with tissue nutritional quality; and (3) correlated with structural components such as spongin fibers. Whereas defensive chemicals were concentrated in the outer 2 mm of A. fulva, the Ircinia species had higher concentrations in deeper tissue layers. Furthermore, no significant positive or negative correlation between chemical defenses and nutritional quality or levels of structural components was observed in these sponges. Overall, these results do not support the prediction that predation pressure by fish and large mobile invertebrates significantly impacts chemical defense allocation in these sponges. 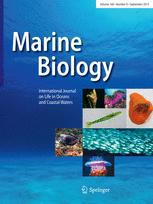