Despite remarkable progress in resuscitation and intensive care, the morbidity and mortality rates in congenital diaphragmatic hernia (CDH) remain high due to severe pulmonary hypoplasia. The pathogenesis of pulmonary hypoplasia associated with CDH is still not clearly understood. Pulmonary parathyroid hormone-related protein (PTHrP) is expressed in the type II epithelial cells and stimulates surfactant production by a paracrine feedback loop regulated by PTHrP receptor (PTHrP-R), which is expressed in the mesenchyme, during terminal airway differentiation. It has been reported that PTHrP knockout and PTHrP-R null mice both exhibit pulmonary hypoplasia, disrupting alveolar maturation before birth. We designed this study to test the hypothesis that gene expression of PTHrP and PTHrP-R is downregulated in the late stages of lung morphogenesis in the nitrofen-induced hypoplastic lung.

Pregnant rats were exposed to either olive oil or nitrofen on day 9 of gestation (D9). Fetal lungs were harvested on D15, 18, and 21 and divided into three groups: control, nitrofen without CDH [CDH(−)], and nitrofen with CDH [CDH(+)] (n = 8 at each time point for each group, respectively). Total mRNA was extracted from fetal lungs and mRNA expression of PTHrP and PTHrP-R was analyzed by real-time RT-PCR and the significant differences between the groups were accepted at P < 0.05 by statistical analysis. Immunohistochemical studies were also performed to evaluate PTHrP and PTHrP-R protein expression at each time point.

Downregulation of PTHrP and PTHrP-R gene expression during late lung morphogenesis may cause pulmonary hypoplasia in the nitrofen CDH model, disrupting alveolar maturation and surfactant production by interfering with mesenchymal–epithelial interactions. 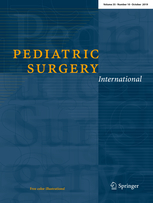