Timor-Leste is among the world’s youngest and poorest countries. It suffers from seasonal food insecurity and has the third-highest stunting rate globally. Previously inadequately documented, this paper summarises recent advances in understanding household food security in Timor-Leste and the multifaceted approaches being used to overcome it. Information comes from the extensive annual surveys of the Seeds of Life (SoL) program in Timor-Leste. The hungry season prior to maize and rice harvests is the key issue in household food security in Timor-Leste. Farm households cope with the problem through crop diversification with tubers playing a lead role as grain stocks dwindle. Foraging for wild food resources, selling animals and other assets, and social networks are other coping strategies. To address seasonal food insecurity, the government has focused on rice importation and the improvement of agricultural productivity within a multi-dimensional program. Information on storage by households of the key staple, maize, indicates an improving trend in food security at the household level from 2006/2007 to 2010/2011 through a significant reduction in the percentage of ‘at risk’ households—those who grow insufficient maize for storage during the year. The current emphasis on the widespread dissemination of the new high-yielding SoL cultivars has the potential to augment these improving trends. Nevertheless this picture remains vulnerable to weather shocks—such as drought—which are anticipated to increase with climate change and it is important to build further resilience into the agricultural systems of Timor-Leste. 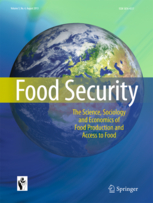