In contrast to other plant–animal mutualisms, seed dispersal interactions, and particularly seed dispersal by ants, are generally considered asymmetric, non-specialized relationships in which dispersers depend less on plants than vice versa. Although myrmecochory is well understood in many terrestrial ecosystems, dispersal of non-elaiosome-bearing seeds by ants has barely been studied outside the Neotropics. Aphaenogaster senilis, a common ant in Southern Spain, collects a great variety of non-myrmecochorous diaspores along with insect prey. At our study site, fleshy fruits of Arum italicum, Phillyrea angustifolia and Pistacia lentiscus represent up to one-fourth of the items collected by A. senilis from June to November. However, they are mostly ignored by other ants. In the laboratory, the addition of A. italicum fruits to A. senilis insect-based diet increased male production and both worker and queen pupae size. Seeds were transported up to 8 m away from the mother plant and deposited in a favorable habitat allowing a relatively high proportion of germination. Given important differences in seed production between species, our data suggest that A. senilis removes virtually all seeds of A. italicum, but a negligible fraction of P. lentiscus seeds. We conclude that in contrast to the common view, dispersal of non-myrmecochorous Mediterranean plants by ants might be an important phenomenon. Keystone disperser ants like A. senilis probably obtain an important fitness advantage from non-myrmecochorous diaspore collection. However, plant benefit may vary greatly according to the amount of seeds per individual plant and the existence of alternative dispersal agents. 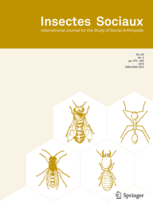