Modeling the role of altruism of antibiotic-resistant bacteria

Based on the new findings in a recent experimental study (Lee et al., Nature 467, 82–86, 2010) that antibiotic resistant mutants of bacteria produce indoles to protect the wild strain bacteria, we propose a mathematical model to describe the evolution of the wild strain, resistant strain and indoles with limited nutrient. We distinguish two cases: (i) mutation is negligible and a resistant strain preexists; (ii) mutation is not negligible. For (i), we establish conditions for co-persistence of both strains, which indicate that the wild strain can survive with the help from the altruistic resistant strain, whereas it dies out in the absence of such a benefit. This consolidates the experimental findings in Lee et al. (Nature 467:82–86 2010). Further analysis and simulations also reveal some new phenomena not reported in Lee et al. (Nature 467:82–86 2010), that is, periodic oscillations of the populations may occur within certain range of the parameters, and there exists bistability in the sense that a stable positive periodic solution coexists with a stable positive equilibrium. 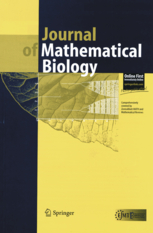