The miscibility of poly(N-isopropylacrylamide) (PNIPA) with poly(vinyl pyrrolidone) (PVP) and a cross-linked poly(acrylic acid) (Carbopol® 971P) was evaluated from the rheological data of aqueous dispersions and the temperature of glass transitions of films made of binary mixtures. PNIPA has a low critical solubility temperature (LCST) of about 33°C, below which 1% dispersion behaves as a viscous system. At temperatures above LCST, the hydrophobic interactions among the isopropyl groups initially provide transient networks of greater elasticity. The LCST of PNIPA as well as its T g (144°C, estimated by DSC and MTDSC of films) were not modified by the presence of PVP. The immiscibility of PNIPA and PVP was confirmed by the absence of interaction between both polymers as shown by FTIR analysis of the films. In contrast, PNIPA and carbopol were miscible and the behaviour of their mixtures differed significantly from that of the parent polymers; i.e. a strong synergistic effect on the viscoelasticity of the dispersions was observed below the LCST. As temperature increased, the blends showed a decrease in the loss and storage moduli, especially those with greater PNIPA proportions. The fall was smoother as the PNIPA proportion decreased. This behaviour may be explained as the result of the balance between PNIPA/carbopol hydrogen bonding interactions (as shown in the shift of C=O stretch in FTIR spectra) and PNIPA/PNIPA hydrophobic interactions. The T g values of the films of the blends showed a positive deviation from the additivity rule; the mixtures containing more than 1:1 amide:carboxylic acid groups have a notably high Tg (up to 181°C). This increase is related to the stiffness induced in the films by the PNIPA/carbopol interactions. 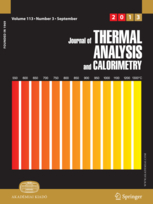