Diabetic groups as defined by ADA and NDDG criteria have a similar aerobic capacity, blood pressure and body composition

Aims/hypothesis. In 1997 the American Diabetes Association (ADA) published new categories for diabetes based on fasting plasma glucose that classified diabetes as a plasma glucose of 7.0 mmol/l, or more, rather than one of 7.8 mmol/l or more, as published previously by the National Diabetes Data Group (NDDG) in 1979. We compared the cardiovascular disease risk factors of subjects classified as having Type II (non-insulin-dependent) diabetes mellitus under the NDDG and ADA criteria.¶Methods. We examined a database of approximately 3700 men (40.4 ± 11.5 years old) and distributed them into four categories: normal fasting plasma glucose (NFG) of less than 6.1 mmol/l, impaired (IFG) 6.1 to 7.0 mmol/l, ADA diabetic 7.0 to 7.8 mmol/l and NDDG diabetic of 7.8 mmol/l or more.¶Results. Fasting glucose was 5.2 ± 0.5, 6.4 ± 0.2, 7.3 ± 0.2 and 11.2 ± 2.9 mmol/l for the subjects of the NFG, IFG, ADA and NDDG groups, respectively. Estimated treadmill VO2max was 41.4 ± 8.0, 36.0 ± 7.8, 32.2 ± 7.6, 30.6 ± 7.0 ml · kg–1· min–1 in the NFG, IFG, ADA, and NDDG groups, respectively (NFG and IFG > ADA and NDDG: p < 0.05). The ADA and NDDG groups were also similar for resting and exercise blood pressure and body composition. Triglycerides and total: HDL cholesterol ratios were higher and LDL cholesterol concentration was lower, in the NDDG group than in all other groups (p < 0.05). Total and LDL cholesterol in the ADA and NDDG groups were similar.¶Conclusion/interpretation. The similarities in the aerobic capacities, blood pressure and body composition of the ADA and NDDG groups indicate that the decision to lower the cut-off from 7.8 mmol/l to 7.0 mmol/l blood glucose for the clinical classification of diabetes was appropriate. The ADA and NDDG groups, however, might not have identical risks for cardiovascular disease because of differences between total:HDL cholesterol ratios, circulating HDL cholesterol and triglyceride concentrations. [Diabetologia (2001) 44: 26–32] 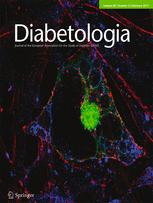