This study examined the considerations that may affect the likelihood of a charity donor, who was recruited face-to-face by a paid external agency and who gave through a low value monthly standing order, reaching the point of financial break even within a certain period of time; taking into account the person’s additional ad hoc contributions to the organisation. Break even was defined as the situation pertaining when a supporter’s total donations covered the external agency’s fee, induction costs, and annual donor maintenance expenses over an anticipated supporter lifetime of 5 years. A questionnaire was mailed or emailed to two thousand agency recruited donors to a UK healthcare charity, resulting in 669 replies. Each of the participants had initially signed standing orders for between £2 and £5 a month, and had been with the charity for at least 4 years. The questionnaire contained items concerning, inter alia, a donor’s sense of obligation, relationship proneness, level of involvement with the charity’s cause, personal inertia, emotional benefits obtained from giving, and satisfaction with the organisation’s work. A Cox proportional hazards regression analysis was completed to determine the main factors that influenced the probability that a person would break even within 4 years following recruitment. In addition, logistic and least squares regression analyses were undertaken to establish the variables that affected low value donors’ propensities to respond positively to requests to uplift the values of their standing orders. 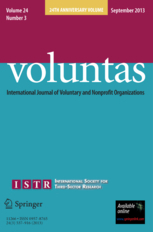