Abstract. Tetraploid plants of a Japanese pear cultivar (Pyrus pyrifolia N.) were induced using an in vitro colchicine treatment. Proliferating shoots were transferred to a shoot proliferation medium (SPM) containing 0.1% or 0.01% colchicine, incubated for 1, 2, 4 or 8days, then transferred to fresh SPM. The ploidy level of the colchicine-treated individuals was analysed by flow cytometry. Four months after colchicine treatment four mixoploids were selected and cultured on SPM for a further 5months. The ploidy level of the proliferated shoots derived from selected mixoploids was analysed, and five tetraploid shoots were selected. The selected tetraploid shoots were rooted, and potted plants were grown in a greenhouse. The stomata of tetraploid plants were found to be longer than those in diploid plants. 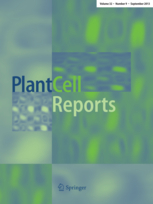