Diabetic foot ulcers (DFUs), a leading cause of amputations, affect 15 % of people with diabetes. Wound coverage in these patients is changelling due to concurrent infection, neuropathy and vascular compromise. Though local muscle flaps were described by Ger et al. and popularized by Attinger et al., these small muscle flaps should be more routinary than they are now.

A retrospective review of all patients with DFUs with exposed bone and osteomyelitis reconstructed by abductor digiti minimi muscle flaps and free skin grafting between January 2010 and December 2011 was conducted.

This study included eight patients. Six patients had ulcers over the heel and two on the lateral aspect of the forefoot. All flaps survived well with no donor site complications. There was partial loss of skin graft in three cases and infection and total loss in one other case.

Abductor digiti minimi is a safe and reliable flap that provides a durable cover. 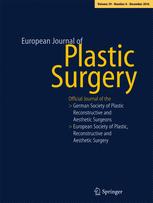