The electrophoresis of a spherical particle along the axis of a cylindrical pore filled with a Carreau fluid is investigated theoretically. In addition to the boundary effect due to the presence of the pore, the influences of the thickness of double layer surrounding a particle and the properties of the fluid on the electrophoretic behavior of the particle are also examined. We show that, in general, the presence of the pore has the effect of retarding the movement of a particle. On the other hand, the shear-thinning nature of the liquid phase is advantageous to its movement. For both Newtonian and Carreau fluids, the mobility of a particle increases monotonically with the decrease in the thickness of double layer, but the mobility is more sensitive to the variation of the thickness of double layer in the latter. The mobility of a particle in a Carreau fluid is larger than that in the corresponding Newtonian fluid, and the difference between the two increases with the decrease in double-layer thickness; in addition, depending upon the values of the parameters assumed, the percentage difference can be in the order of 50%. 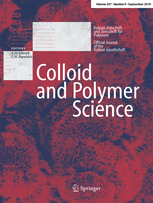