The formation of 4-hydroxy-2-(E)-nonenal (HNE) in a corn–soy oil blend during frying was investigated. Frozen shoestring potatoes were fried once per hour at 180 °C for 8 h/day over a 4-day period. As a control, oil was also heated under identical conditions, except that no product was fried. HNE was quantified by GC–MS using a stable isotope dilution assay with pentaflurobenzyl hydroxylamine hydrochloride (PFBHA) and trimethylsilyl 2,2,2-trifluoro-n-(trimethylsilyl)acetimidate (BSTFA) derivatization. The HNE concentration in the potato fryers increased throughout the first day of frying. On subsequent days the daily maximum HNE concentration was reached after fresh oil was added and the fryer was brought to the frying temperature. The potato fryer oil reached a maximum concentration of 5.6 ppm during the second day of frying. Similarly, the HNE concentration of the oil in the control fryer increased throughout the first day of heating. On subsequent days the daily maximum HNE concentration varied throughout the experimental period. The control fryers reached a maximum concentration of 6.3 ppm at the end of the second day of heating. Throughout the experimental period there was a tendency for the oil in the control fryer to have a greater concentration of HNE than the oil in the potato fryer. Overall time of the experiment and heating with food versus heating without frying food and their interaction were significant in terms of HNE formation. 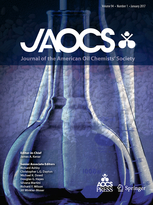