Comparison of preputial sac and urine cultures in healthy children

The aim of the present study was to examine subpreputial bacteriology and to compare it with the urine cultures of healthy male children. Seventy-two male children were divided into two groups as A and B according to age. In both groups preputial sac and urine cultures were taken simultaneously. Gram (+) enteric cocci were the most common isolated pathogens from the preputial sac in group B. Enterobacter, E. coli and staphylococci species were isolated from the urine cultures of three patients in group B. We could not find any difference between the preputial sac swabs of group A and B patients, but the isolation rate of urine cultures of group A patients was significantly higher than group B (p < 0.05). The findings of the present study support a potential role of the prepuce acting as a reservoir of faecal bacteria in the pathogenesis of UTI in male infants, especially in the first year of life. Improved penile hygiene after the first year of life does not alter the subpreputial bacteriology, but significantly decreases the contamination of urine. 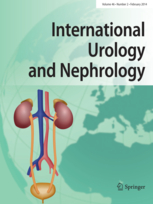