Isolation of eight microsatellites loci from the saddled bream, Oblada melanura and cross-species amplification in two sea bream species of the genus Diplodus

We have developed eight new microsatellite markers for the saddled bream (Oblada melanura) from an enriched genome library protocol. All these loci are polymorphic, with mean allelic diversity of 14.75 (range 3–22), and expected and observed heterozygosities from 0.233 to 0.918 and 0.212 to 0.913, respectively. Cross-species tests in two close relatives of the genus Diplodus (D. sargus and D. vulgaris) revealed successful amplifications at 6 out of 8 loci, with means allele number of 6.67 (range 4–10) and 6.50 (range 4–10), respectively. These results are consistent with the close phylogenetic relationships between the three species, indicating this set of primers might proved useful for studying the levels of genetic diversity and population differentiation in these three species and in other phylogenetically close species of the genus Diplodus and Sparus. 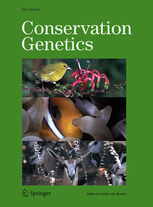