Temozolomide (TMZ) and BCNU have demonstrated anti-glioma synergism in preclinical models. We report final data from a prospective, multi-institutional study of BCNU wafers and early TMZ followed by radiation therapy with TMZ in patients with newly diagnosed malignant glioma. 65 patients were consented in 4 institutions, and 46 patients (43 GBM, 3 AA) were eligible for analysis. After resection and BCNU wafer placement, TMZ began on day four postoperatively. Radiation and TMZ (RT/TMZ) were then administered, followed by monthly TMZ at 200 mg/m2 for the first 26 patients, which was reduced to 150 mg/m2 for the remaining 20 patients. Non-hematologic toxicities were minimal. Nine of 27 patients (33 %) who received 200 mg/m2 TMZ, but only 1 of 20 (5 %) who received 150 mg/m2, experienced grade 3/4 thrombocytopenia. Median progression free survival (PFS) and overall survival (OS) period was 8.5 and 18 months, respectively. The 1-year OS rate was 76 %, which is a significant improvement compared with the historical control 1-year OS rate of 59 % (p = 0.023). However, there was no difference in 1-year OS compared with standard RT/TMZ (p = 0.12) or BCNU wafer followed by RT/TMZ (p = 0.87) in post hoc analyses. Early post-operative TMZ can be safely administered with BCNU wafers following resection of malignant glioma at the 150 mg/m2 dose level. Although there was an OS benefit compared to historical control, there was no indication of benefit for BCNU wafers and early TMZ in addition to standard RT/TMZ or early TMZ in addition to regimens of BCNU wafers followed by RT/TMZ. 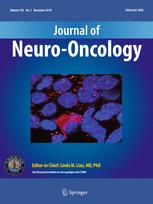